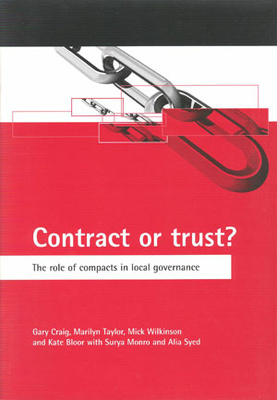 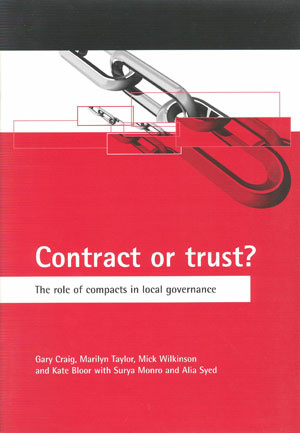 The role of compacts in local governance

Relationships between local and central government and voluntary and community organisations have been controversial for some time; and particularly since the introduction of the 'contract culture' during the 1980s. New Labour now argues that it wishes to develop a 'partnership culture' in which the voluntary sector is a major partner.

New local partnerships, or compacts, of varying kinds are now being developed across the UK, involving a range of local public agencies including councils, health bodies and Learning and Skills Councils. This report is the first national evaluation of how this new approach to partnership working is being implemented at a local level.

Based on 12 detailed case studies in England, Scotland and Wales, the report describes the development of the compacts, highlights some of the major barriers to effective partnership working, and offers key lessons from their development to date. It also addresses the particular difficulties faced by marginalised groups, such as small community groups and organisations representing black and minority ethnic communities.

This report is a key resource for all those concerned with effective and participative local governance, including local government officers and members, managers and staff in health organisations, and voluntary and community sector workers. It provides key arguments in favour of the development of local compacts and guidance for those wishing to engage in their development.

"... certainly, a useful tool when negotiating for better practice in the establishment and ongoing development of compacts at a local level." NACVS Circulation