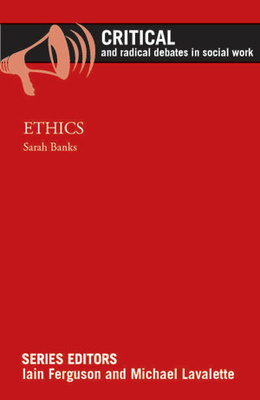 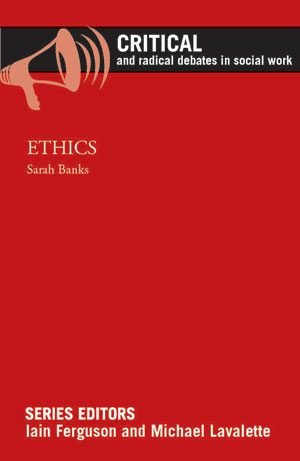 The past few years have seen a renewed interest in the subject of social work ethics. In this short form book, part of the Critical and Radical Debates in Social Work series, Sarah Banks argues that this can be seen as reflecting two very different agendas. On the one hand, it is part of a progressive movement which offers a critique of New Public Management (NPM), or managerialist, approaches through emphasising the role of social workers as active moral agents working for social justice. On the other hand, the growth of interest in ethics can be viewed as part of NPM, with codes of ethics a means of regulating and controlling the conduct of professionals and service users. She emphasises the importance of reclaiming professional ethics for social work, and outlines a preliminary framework for a situated ethics of social justice.

"Politically committed...accessible to a wide audience and gives a satisfying contribution to the debate about social work ethics." Research, policy and planning

Professor Sarah Banks is Co-director of the Centre for Social Justice and Community Action at Durham University. She has a background in community development and previously worked in the voluntary sector and local authority social services. Her research interests include professional ethics, community development, community-based participatory research and work with young people.

A roadmap for social work ethics: reflections and a proposal ~ response by Frederic G. Reamer;

Ethical practice in an unethical environment ~ response by Michael Reisch;

Working in the spaces between care and control ~ response by Merlinda Weinberg;