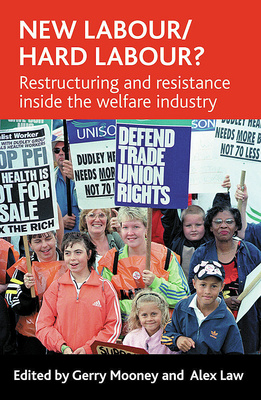 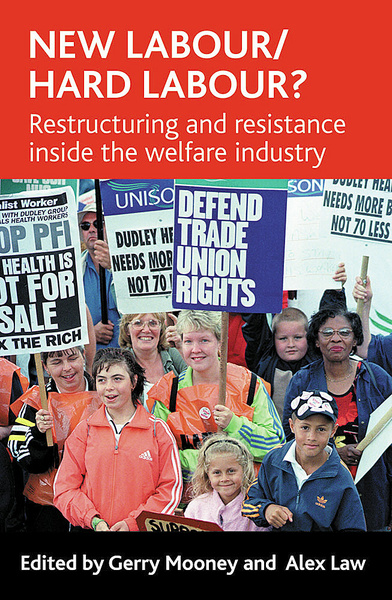 Restructuring and resistance inside the welfare industry

There are an increasing number of studies devoted to an examination of New Labour's social policies. However, thus far there has been little in the way of substantive discussion of opposition to and conflict around key elements of New Labour's agenda for the welfare state and public sector, from those who are involved in the frontline implementation and delivery of welfare policies. Since the mid to late 1990s, there have been continual and recurring episodes of industrial action of various kinds involving social workers, teachers, lecturers, nurses, hospital ancillary staff, nursery nurses, home helps and local authority librarians among others. Welfare delivery has become a central point of industrial relations disputes in the UK today.

This book provides the first critically informed discussion of work and workers in the UK welfare sector under New Labour. It examines the changing nature of work and explores the context of industrial relations across the welfare industry. While the main focus is on the workforce in state welfare, this is set within the context of recent and current shifts in the mixed economy of welfare between state, private and third sector organisations.

"This is an important book. It reports the impact of pro-business policies on those who struggle on a daily basis to provide vital services in the midst of cuts, low pay and privatisation. But it also shows that those policies can be resisted. It deserves to be read by everyone who wants to know what the so-called 'reform' of public services is really about." Mark Serwotka, General Secretary, Public & Commercial Services Union

"... the great strength of all the contributions is the way they weave theory with practice. ... Order this book for your trade union branch and local library - it's a must for activists in the welfare sector." Socialist Review, November 2007

"On the whole, it is refreshing to read a book that examines the impacts of welfare policies on the everyday working lives of workers in the 'welfare industries'.

"This edited collection provides a worthy and illuminating contribution to the debates and controversies surrounding New Labour's dogged determination to continue with-and vigorously reinforce-previous attempts by Conservative governments to construct a neoliberal platform on which delivery of welfare (and the 'welfare industries' responsible for that platform) could be significantly restructured and modernised." Benefits, Vol 16:3, 2008

"This edited volume represents a path-breaking approach to studies of change in the welfare state." Critical Social Policy, Vol 28:4, 2008

"What happened to those workers in the public sector when New Labour came into office? This book tells us, systematically, on the basis of sound empirical research and across the public sector as a whole. Essential reading, not just for academics, but for trade unionists and anyone interested in both the reality described and in doing something about it." David Byrne, University of Durham

"This timely collection illuminates a very important aspect of the New Labour regime - its tough and often hostile approach to workers within the welfare state. This has received scant attention from social scientists, but this book provides an expert and critical survey across a wide range of the salient issues with an appropriate emphasis on workers' resistance." Norman Ginsburg, London Metropolitan University

AUTHOR WOULD LIKE ALL THREE TESTIMONIALS ON BACK COVER IF POSS. SERWOTKA'S IS THE MOST IMPORTANT ONE.

Gerry Mooney is Senior Lecturer in Social Policy and Staff Tutor in the Faculty of Social Sciences at The Open University. With Gill Scott he is co-editor of Exploring Social Policy in the 'New' Scotland, Policy Press 2005. He has also written widely on issues of class, the sociology of the city and social policy in the context of devolution.

Alex Law is a Lecturer in Sociology at the University of Abertay Dundee. He has published in the areas of national identity, workplace restructuring, class, urban sociology, mass communications, and social theory.

New Labour, 'modernisation' and welfare worker resistance ~ Gerry Mooney and Alex Law; Strenuous welfarism: restructuring the welfare labour process ~ Alex Law and Gerry Mooney; A 'Third Way'? Industrial relations under New Labour ~ Peter Bain and Phil Taylor; Acts of distrust? The experiences of support workers in PFI hospital schemes ~ Sally Ruane; Control and resistance at the ward-face: contesting the nursing labour process ~ Peter Kennedy and Carole Kennedy; 'I didn't come into teaching for this!' The impact of the market on teacher professionalism ~ Henry Maitles; Ambiguities and resistance: academic labour and the commodification of higher education ~ Alex Law and Hazel Work; The paradox of professionalisation and degradation in welfare work: the case of nursery nurses ~ Gerry Mooney and Tricia McCafferty; Social work today: a profession worth fighting for? ~ Michael Lavalette; Working 'for' welfare in the grip of the 'Iron' Chancellor: modernisation and resistance in the Department for Work and Pensions ~ Tricia McCafferty and Gerry Mooney; Working in the non-profit sector: contract culture, partnership, compacts and the 'shadow state' ~ Lynne Poole; Beyond New Labour: work and resistance in the new welfare state ~ Alex Law and Gerry Mooney.