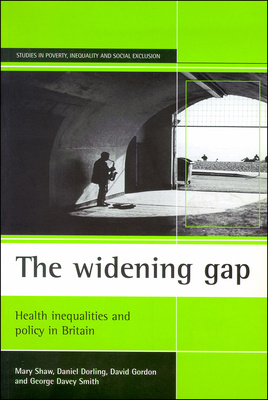 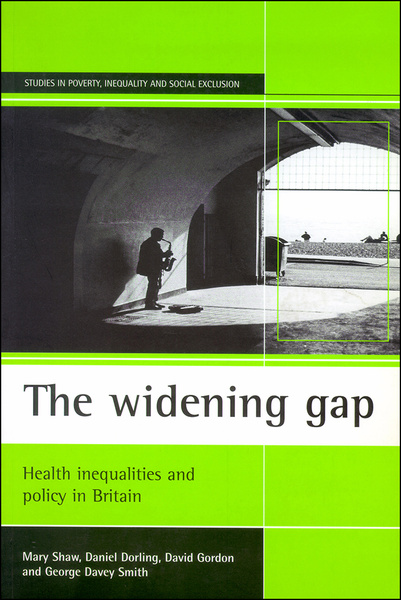 Relentlessly, the wide health gap between different groups of people living in Britain continues to get even wider. This book presents new evidence (which was not available to the government's Independent Inquiry into Inequalities in Health) on the size of the gap, and the extent to which the gap is widening. In particular, new geographical data are presented and displayed in striking graphical form.

It challenges whether the government is concerned enough about reducing inequalities and highlights the living conditions of the million people living in the least healthy areas in Britain. It presents explanations for the widening health gap, and addresses the implications of this major social problem. In the light of this evidence the authors put forward social policies which will reduce the health gap in the future.

The widening gap synthesises all the information available to date and should be read alongside the report of the evidence presented to the Independent Inquiry into Inequalities in Health (Inequalities in health, The Policy Press, 1999) and by all those concerned with reducing health inequalities.

"... their analysis of the potential impact of current government policies on inequalities in health is enlightening." BMJ

"It makes an excellent contribution to our understanding of health inequality in Britain and provides a useful contibution to the policy debate."

"When Tony Blair tours the North to show the wide variations within regions as well as between them, and when Alan Milburn declares commitment to tackling inequalites in heart disease as part of making a fairer society generally, then you know something has touched a chord. It is rare for an academic work to have such an effect on media and ministers, but the Widening Gap has done just this." John Nicholson, Chief Executive, UK Public Health Association

"... a challenge and a lesson for all who are working to reduce inequalities in health." BMJ

"... a brilliant book. ... provides a marvellous template for similar efforts to investigate the worst and best-health million in other countries around the world." International Journal of Epidemiology

"The book draws together evidence on social inequalities in health ... there is much in this book to be commended ... it will be widely read and quoted ... The book gives well-deserved attention to ... often overlooked issues." The Lancet

"The study was the most comprehensive examination of the geographic distribution of health and life chances in the UK since the Black report and its findings are stark." SPS research.

Introduction; The health gap; Explaining the gap; Narrowing the gap - the policy debate.